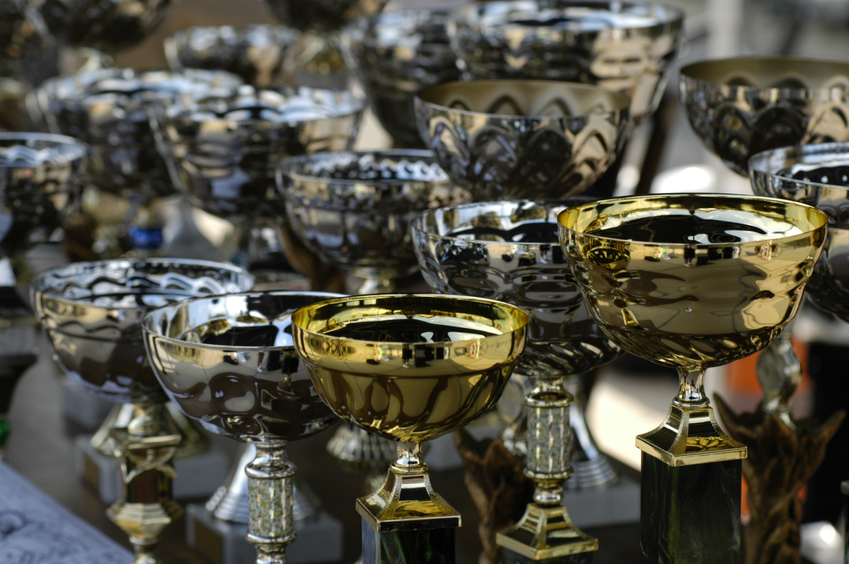 Have you ever watched a sporting event or awards show and wondered what the trophies or awards are made of? For instance, Oscar statuettes, or ‘Oscars’ as they’re better known, are made of Britannia metal which is then plated in copper, nickel silver, and lastly, 24-carat gold.

Sports trophies are also often made by the same process, but many are made differently, for example, the famous three-dimensional cast of the ‘Gladiators’, the Winfield Cup trophy, is a bronze cast, whereas the Wimbledon Ladies’ Singles Trophy is a partly gilded silver salver.

Here’s a look at our awards and sports trophies being made, what they’re made of and how they’re cast and engraved.

Not all trophies that glitter are made of gold, and in fact, due to its high value not many trophies are actually made of gold at all, and those that do contain the precious metal are generally gold-plated, like the Oscar statuettes.

Most awards and trophies are actually made with the plastic injection technique as this material and technique can be used to mold shapes that are at times highly intricate.

However, a variety of other materials is used in the creation of awards and trophies, including nickel alloy, glass, wood, bronze, and silver, with many modern awards and trophies featuring a plastic cast which is then plated. Another popular option is a wood base with a plastic cast on top (usually featuring a plate for engraving), and yet another option is a completely plastic trophy, also with a plate on which the award and individual’s name is engraved.

Check out this video blow on how trophies and awards are made.

How Trophies Are Moulded

Plastic injection molding is the most commonly used technique in the production of trophies, though other methods are sometimes used. Some trophies are cast as one piece, though many trophies feature components with each component cast separately, i.e. piece by piece.

Steel dies are used to create the form of the trophy components. When inserted into the molding machine, liquid plastic fills the dies and forms the different trophy components, and some components, most notably the base, also have metal studs and/or gypsum inserted or injected to provide additional weight and strength.

Trophies made of multiple components then need to be carefully assembled, whereas single component trophies are inspected and then set aside ready to be engraved.

In comparison to the rest of the process, the process of engraving trophies seems the simplest and easy to carry out, but there is a great deal of skill involved in engraving a trophy or an award, after all, there is no room for error here if the engraving is to be aesthetically pleasing. Engraving techniques for awards and trophies include rotary, hand and laser engraving.

Sports Star Trophies are engraving experts and use customized methods to engrave awards and trophies of many materials, including glass, stainless steel, and wood. Don’t hesitate to get in touch if you are looking to have a customized award or trophy commissioned.