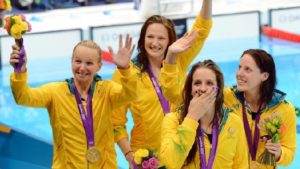 With three gold, four silver and three bronze for a total of 10 out of our 29 medals at Rio 2016, swimming is Australia’s most successful Olympic sport, as has been the case for many years. While Australian swimmers didn’t pick up as many medals as was expected this Olympics, they competed admirably and did their supporters across the country proud.

Many Australians may be surprised to learn that along with Greece, Australia is the only country to have entered a team in every Summer Olympics since the 1896 Athens Olympics. While that year our sports-loving nation only entered a single runner, Edwin Flack, since the 1900 Paris Olympics we’ve entered swimmers every year, many of whom have done exceptionally well.

In fact, our sole swimming representative in 1900, Frederick Lane, returned home with two individual gold medals and set the bar for all other Australian swimmers to follow. Australia has since won 62 gold medals in swimming at the Olympics, second only to the US, and well-above Germany in third place.

Australia’s greatest medal tally in swimming was 20 (six gold, six silver and eight bronze) at the 2008 Beijing Olympics, and Australian swimmers Ian Thorpe and Shane Gould are the most decorated Australian athletes. Dawn Fraser, an Australian swimming icon, is also deserving of a mention here, having won three consecutive gold medals (1956, 1960 and 1964) in the 100-metre freestyle, and she’s also the first swimmer to win any Olympic event three times in a row. Here’s a look at Australia’s five greatest Olympic swimmers (so far):

Looking at the above list you may feel as though Australia’s glory days in the swimming are a thing of the past, but that’s not the case at all. There are many fantastic up-and-coming swimmers who achieved great things this year in Rio and we can expect to see more great performances from them in years to come, especially Kyle Chalmers who’s tipped to be the sport’s next Michael Phelps.

With these young Australian swimmers and our country’s proud swimming heritage, we can expect to see many more Olympic swimming medals Australia-bound in the years to come. Please get in touch if you’d like to discuss customised swimming medals and trophies for your local swimming club.